Get a Quote
Download Spec Sheet
Already a customer?
Shop A36 Channels on Kloeckner Direct 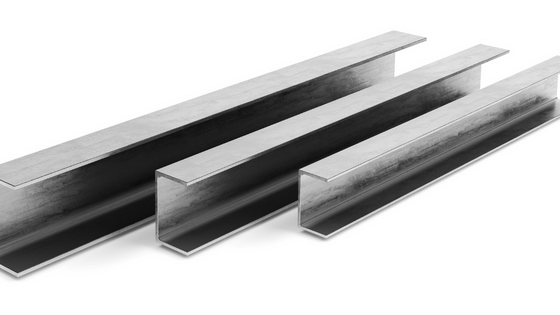 General Info About A36 Channels

Channels are hollow rectangular beams typically fashioned from low-carbon steel. Channels are formed from strong structural steel and used in load-bearing projects such as staircases, ramps, walkways, or other structural applications. To add strength to construction projects, they can be welded to other channels, plate steel, or even other types of materials.

Low-carbon A36 channels have great strength for lighter weight applications and should not be confused with high-carbon steel grades, which are used for much heavier load bearing applications.

A36 channels are one of the most commonly used forms of structural steel because this steel grade is lightweight yet extremely strong, making it an ideal choice for many different applications where extra support is needed.

More Details About A36 Channels

The main advantage of using A36 steel for a channel is found in its high tensile strength. Plus, this steel grade will elongate up to 20% of its length. These properties make A36 steel channels last for a long time.

The major disadvantage? A36 steel is known for its low corrosion resistance. With low levels of nickel and chromium, this steel grade will begin to break down if constantly exposed to harsh environmental conditions.

A36 steel channels have a wide range of applications in numerous industries. Some of these industries include:

A36 steel channels are used to provide durability and strength when constructing bridges, columns, cranes, trusses, or anything else that needs a sturdy base or frame. They are also commonly used in recreational vehicles like RVs or boats due to their sturdiness.

A36 steel channels are a commonly used material in construction and building projects. This low-carbon steel is not heat treated, meaning that its strength and durability don’t come from hardening. It is most commonly used when great load-bearing capacity or support is required, such as beams and girders.

Specifically, A36 steel channels are often used for:

A36 steel has a machinability rating of 72%, meaning it’s not as easy to machine as 1018 steel but is still fundamentally workable. Its average surface cutting feed is 120 ft/min.

Expert welders recommend using an oxyacetylene torch when working with A36 steel channels. Oxyacetylene torches operate by mixing acetylene and oxygen gas together, producing an intense flame that can reach temperatures of up to 3,500 degrees Fahrenheit (1,927 degrees Celsius).

Heat treatment involves three parts — heating, holding, and cooling. A36 steel can be heated to help prevent oxidation. Its holding time depends on its size with larger pieces getting longer treatment. Finally, the cooling process helps determine the size and shape of the final product.

A36 steel is basically a steel that has been given some treatment, either galvanized or pre-heat treated. This is important because, without it, A36 would be much weaker. Although it’s far from weak as it is!

Frequently Asked Questions About A36 Channels

What is the difference between structural, MC channel, & bar channel?

Structural channel is typically used in larger load-bearing projects such as buildings and bridges, where the load-bearing properties are important. An example would be a column or beam in a building. It is designed to provide large amounts of support while also being light in weight so that it doesn’t add extra bulk to the building.

MC (or Mechanically Coated) channel is best used on smaller projects such as garden sheds, fences, or outdoor storage units. MC differs from structural in that the coating protects it from rusting over time where structural wouldn’t need any extra protection if it were kept indoors with a dry environment.

A bar channel is similar to a standard structural channel, but it is smaller and therefore typically used for lighter weight projects such as ornamental applications.

What is a C channel?

A C channel is a solid steel bar with a “c shape” on each end. It’s also referred to as a steel channel or an I-beam, but it is much more versatile than either of these names implies. This type of material is actually used in many different applications because of its great strength and ability to withstand heavy loads. In construction, it’s often used to support beams that span long distances across roofs or floors.

The American Society for Testing and Materials (ASTM) designaties carbon steel with a yield strength of 36,000 PSI as A36 steel. The “36” corresponds to mechanical not chemical properties.

What is C channel used for?

C channel is used for a variety of projects, including fences, ceiling grids, guard rails, outdoor furniture, garage shelving units, and many other industrial-grade construction products. One of its primary benefits is that it’s both durable and resistant to rusting or corrosion even when it comes into contact with water. That’s why C channel can be used in situations where regular galvanized steel might not hold up as well over time.

What is the difference between C channel and U channel?

While you may encounter some steel beams that are known as C or U channels, these are not commonly used anymore. So why do we sometimes still refer to the steel beams you see in construction projects like the ones above as C and U channels?

In the past, when workers needed to make a distinction between different materials, they would use the shape of the beam. These days, it is more common to simply refer to steel beams by their material type. Since everyone knows what you mean when you talk about C channel and U channel steel beams now, it’s no longer necessary to call them by their shape names!

What is the Difference Between an H-Beam, W-Beam, and S-Beam?

Steel beams—like the h-beam, w-beam, and s-beam—support heavy loads. In fact, they make up...

What is an I-Beam?

An I-beam is a standard structural steel shape that serves as critical framework for...

Structural steel is one of the most widely used materials in commercial and industrial...

When starting a new commercial or residential project, you will want the right structural...

A Rundown of Structural Steel Shapes

What’s the Difference Between ASTM A36 and ASME SA36?