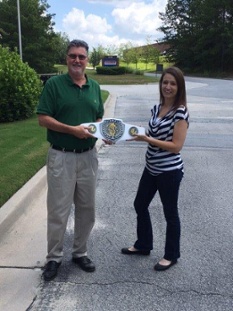 At Kloeckner’s Suwanee Georgia branch, there can be only one Top Dog of the Month. The award goes to the top salesperson, but the competition isn’t as simple as who sells the most.Named for the Kloeckner Metals logo, theTop Dog of the Month competition utilizes a points system so that all the salespeople are on an even playing field. Various things have point values, such as sales, profit, processing orders, and outbound calls.

“Everything has a separate point value, and I kind of made it where everybody has a chance to win it,” says Barry Peeples, sales manager at Kloeckner Metals and creator of the Top Dog competition. “A couple months ago things were kind of stagnant around the sales office. We were trying to figure out how to bring a little excitement into the sales office and motivate people in a fun way.”

The competition is currently in its third month, and already there have been two different winners. In addition to bragging rights, the winner gets a professional wrestling belt to hang above their desk. Everyone has a place to hang the belt up by their desk, a place that remains conspicuously empty unless the person manages to win the competition. There is an award ceremony each month where the whole office comes down and the winner is announced.

“Your coworkers don’t see your paycheck, so this is something tangible where you can say, ‘hey, I’m the better sales person this month,’” Barry says. “Certainly it has generated a lot of talk, a lot of chatter, and a lot of competition.”

The sales staff at Suwannee already had an unofficial friendly competition going, and the Top Dog of the month competition evolved from that. Barry says that a good sales person is going to be competitive by nature. A competition like this taps into that natural inclination and really motivates people.

“Everyone who is truly a good sales person always wants to be number one,” Barry says.

The game continues to grow, as new things are assigned point values. Other branches have already started asking Barry about the game. He believes that creating a game like this is a much better way to get people motivated than simply standing up and telling them what needs to be done. A game like this lays out for employees what needs to be done, but it is up to them to do it and then be rewarded for it. If the game is fun, people will play it, and if it is making people more productive, it is worth doing.

“It has really been a good thing for us here,” Barry says. “I recommend that any other person in the sales manager position like I am, consider doing something like this for your guys.”