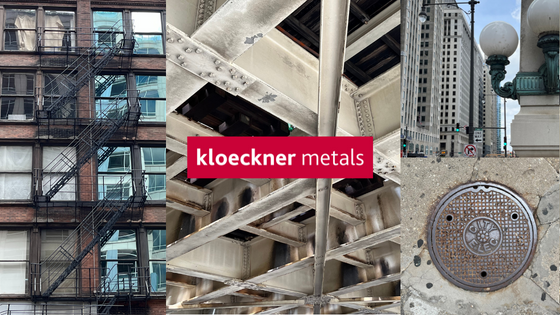 Steel touches everything. That was certainly the take-home message at the first-ever Forge Ahead conference, hosted by the Metals Service Center Institue and proudly co-sponsored by Kloeckner. We’ve been a member company with MSCI for years, frequently participating in and sponsoring various types of events. Over the last two years, they’ve consisted mostly of webinars and CEO Huddles (BTW – ICYMI: our CEO, John Ganem, along with Barbara Smith, Board Chair, President & CEO, Commercial Metals Company, hold the record for highest attendance out of all CEO Huddles). 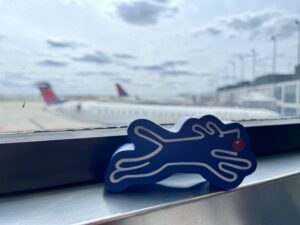 You Had Us at Bougie Brunch

Naturally, when we found out what Briana Dee and Tyler Carlson had cooked up with their team at MSCI headquarters, around 200 steel lovin’ Millennials and Gen Zers began chomping at the bit to gather in Chicago in May for the free event. There were 41 service center companies, 16 mills, and 3 affiliate member companies represented, and several attendees even made the trek from as far away as Alaska and Montreal. For some, it was the first time they’d ever traveled for work, and for many, it was the first time they’d gotten on a plane since the world opened back up. Throw in an itinerary boasting of a night of dart throwing, rooftop treatment at a Cubs game, and something called “Bougie Brunch,” and well, you’re going to attract more than a few Millennials and Gen Zers. Alas, it would be a networking weekend engagement, where we’d get to nerd out over steel with our peers, and Kloeckner showed up a dozen deep. 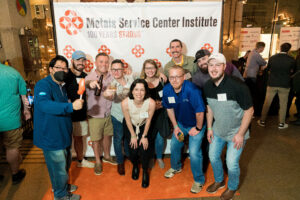 We arrived at the hotel just in time to grab showers and walk over to a chic event space called Flight Club. We’d been traveling since 4 am, running on pure excitement and more coffee than a person ought to consume in less than 24 hours. I was ready to unwind and meet some cool folks.

It was immediately clear that MSCI and their gracious sponsors had spared no expense to woo the youth. They had us in this cool section upstairs, with vintage floral wallpaper and artsy fixturing. The dart boards were set up like bowling lanes, and each had a whole digitally integrated scoreboard. I opted to mingle instead of playing because I am two things: 1) highly competitive and 2) bad at darts. 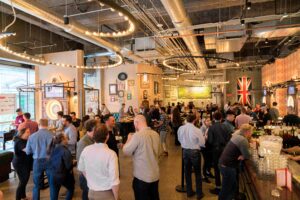 There was a delightful smattering of perfect finger foods, and you could request just about any beverage you wanted. The service was fantastic and quick to point out must-see attractions. They even had a few pro photographers and a videographer from Salvi Media. This was only the first day, so our expectations for Bougie Brunch were kicked up a notch.

The next morning was damp, but we all straggled into a conference space near Wrigley and began consuming delicious little breakfast sandwiches, made-to-order omelets, and a variety of breakfast staples. Once we had time to meet and greet, everyone filed into a big room where we were officially welcomed by Briana and Tyler of MSCI. They did a fantastic job introducing the heart of Forge Ahead, so we’ve forgiven them for making us do that collective TikTok dance. It was during this initial intro, for the first time, I heard a term that I wasn’t familiar with yet. 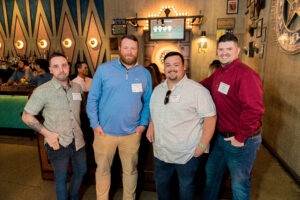 Changing of the Guards

We’ve all heard that we’re living in the time of the “Great Resignation,” which encompasses a struggle observed in all industries. It turns out, that the reason for this entire event was to gather momentum and begin countering something called the “Great Retirement.” That term might be universal to skilled labor jobs, but when Tyler said it, I realized just what a delicate and unique position the entire metals industry is in with its greying workforce. 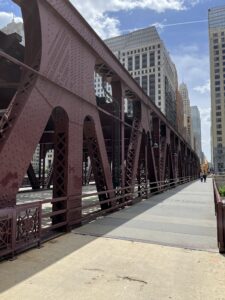 As someone who is still new to steel, that was insightful for me. The labor shortage issues that are becoming more and more omnipresent are only a sliver of the problem. The bigger conversation is about younger people not falling into trades as their parents might have. Steelwork isn’t for the faint of heart, you can’t do it while you stream YouTube videos, and this made me begin to understand why MSCI and its member companies had spent such care and consideration tailoring the weekend to fit our interests. It also gave me more context about the industry’s challenges to flesh out future writing. 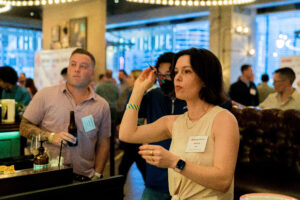 After intros, we watched a video compilation of CEOs and other leadership figures from our companies. It was inspiring to hear them speak about the years they’ve put into metal. The striking common message we heard from all of them was the statement I began with; steel touches everything – the planes, trains, and automobiles that got us there, the counter tops in the kitchen our food was prepared in, and so much of the city I had been ogling since we landed.

The Future of Steel

This fact had not escaped me prior to Forge Ahead, but it was just more pronounced while sitting in a room full of other people my age, many of which had randomly found their way into the profession. In a word, steel is sexy, and it’s fine that not everyone will get that. This weekend definitely created and fortified testimonies inside generations who aren’t immediately associated with the industry.

Working in an industry with products that have so many tentacles in other spaces also holds many benefits. For one, the sustainable possibilities we’ll see come to fruition over the next 15 years will only generate better wages, more efficient processes, and a much happier planet. Those are definitely things Millennials and Gen Z desire for balance.

We closed out Saturday with a soggy Cubs game, but the rain didn’t stop us from having a blast. The whole weekend took a year of painstaking planning, and it seemed to be over in the blink of an eye. We left with new connections, reinvigorated goals, and to put it the most Millennial way possible: it was a whole vibe. 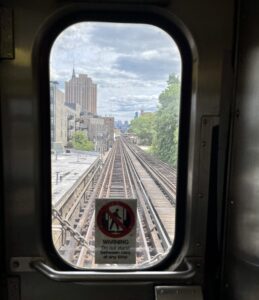