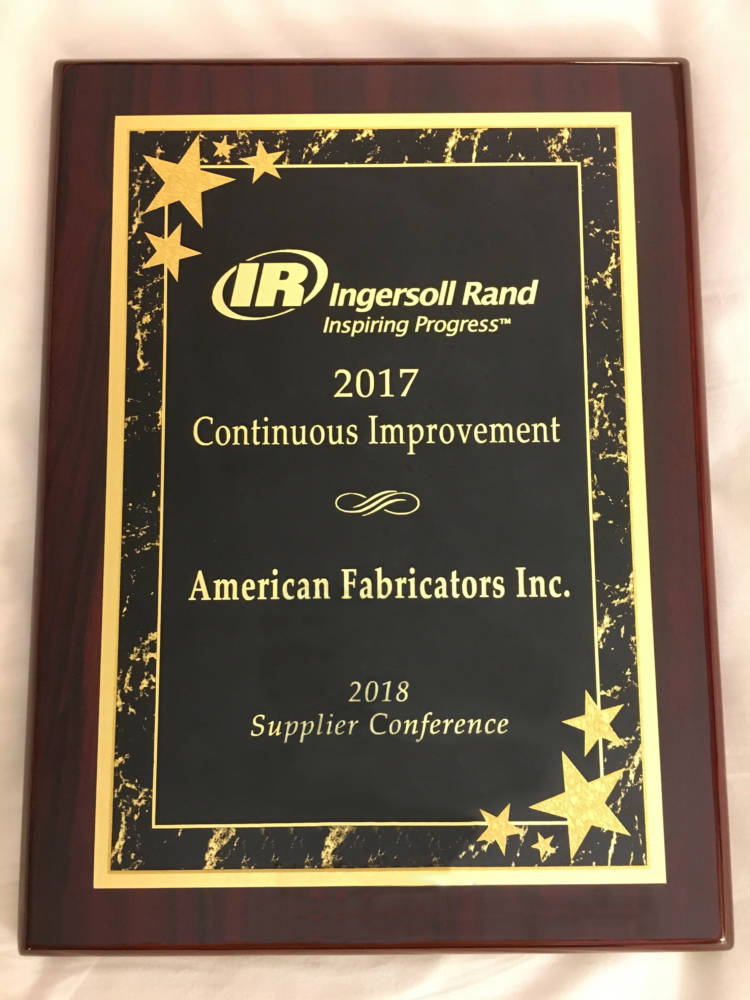 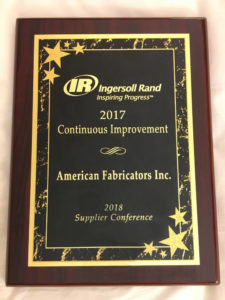 Every year Ingersoll Rand invites its top 100 suppliers from around the world to their annual Global Supplier Conference to talk about how the previous year went, what’s the plan for the upcoming year, and where are they going in the future. American Fabricators was one of their key suppliers invited to this year’s conference on January 16 and 17 in Charlotte, North Carolina. Todd Hammel, General Manager, was there representing AFI and John Ganem, our new CEO, and John Riso, EVP of Commercial Accounts, attended for Kloeckner Metals.
As Kevin Belling, Global Procurement Leader for Commercial HVAC for North America, stated, “A lot of companies talk about continuous improvement, but at Ingersoll Rand our commitment to lean principles and our adherence to our Business Operating System dictate a commitment to continuous improvement. We strive for it…….we expect it – of ourselves and our partners…….and we reward it.”
“The award for Continuous Improvements recognizes those who use operational excellence principles to drive improvement in key performance metrics.”
This year’s recipient for this award was American Fabricators!
After coming off a tough 2016 season, the team at American Fabricators and a group from Trane/Ingersoll Rand came together in January 2017 to have a transparent conversation to discuss challenges and operational hurdles on both sides in 2016 and how we could work together to resolve these issues so we could support Trane in reaching their goal of 95% on-time delivery to all of their customers in 2017. Through lots of planning, collaborative efforts, and process changes on both sides, AFI was a key supplier that helped Trane achieve an overall on-time delivery of 93% for 2017. This was a new all-time record for Trane.
The team at American Fabricators was very excited to be recognized for all of their hard work and their contribution to Trane’s success in 2017. According to General Manager Todd Hammel, “There is currently a lot of continuous improvement initiatives underway and more changes to come. We know that 2018 will even be better than last year”.