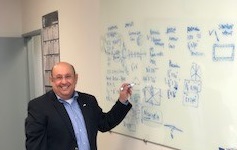 Sid Armanious, former VP of sales for Kloeckner’s Western Region, retired this past July after 45 years in the steel industry. During his career, Sid had the opportunity to work on both the commercial and technical sides of the industry. He made countless relationships buying and selling steel in 25 different countries spread over three continents.

“If I had the opportunity to work in this industry for another hundred years, I wouldn’t hesitate,” Sid said. “I have taken hundreds of thousands of orders, but every order, every number, and every piece of steel that we sell has its pleasure which is unmatchable in life. It is like having a nice, juicy hamburger when you are 20 years old.”

Sid began his career in steel working at a mill in Egypt, where he was born. Having graduated with a major in chemistry, he worked on the technical side as a shift manager on the electric arc furnace. Sid still remembers the first time he saw steel making in person.

“I looked at the molten steel coming from the furnace,” Sid said. “When I saw this power, the power of melting steel scrap and raw material and turning it into liquid steel with the specifications that can help the human race with development, and growth, and landing on the moon, I fell in love with this industry.”

Sid’s passion for steel led him to get a master’s degree in metallurgy, after which he returned to the mill to work in an elite quality assurance department reporting directly to the chairman of the mill. After that, Sid got his first taste of the commercial side of the business when a supplier approached him with a job opportunity at a company based in both Egypt and England.

“Someone thought that I would be a good commercial guy,” Sid said. “So I talked to the chairman and he said even though he would miss me very much, he said that is a great opportunity financially and professionally for me because I would be open to the whole world. I worked there and I was buying and selling steel from Europe and England and selling in the Middle East, and it was a big job for me.”

After a while, Sid and his wife decided that they wanted to live closer to their family in the United States. Members of the family had had started legally immigrating to the United States in 1958 and Sid had a green card already. So Sid moved to California where he began working for Primary Steel. He was immediately impressed with the business environment in the United States, which he thinks contributed a great deal to his success.

“Buying and selling in America is much more friendly than anywhere in the whole world,” Sid said. “That is why America is America. When I first started selling at Primary Steel, I said, ‘Woah! My gosh! It is like Disneyland. I don’t have to wait; I can take a PO on the phone if the offer is acceptable.’”

Sid was very successful working at Primary Steel (which then became a part of Kloeckner), working his way up to Vice President of the entire western region. Sid used his technical background to augment his commercial skills. He put on “Armanious University” where he would teach the technical aspects of steel to people from all around Kloeckner. His technical knowledge also earned him a reputation among clients who would call him up for advice even if they were buying from someone else.

“You can negotiate numbers, but you cannot massage facts,” Sid said. “The specification of the steel is what it is. Customers became business friends just because they trust what we tell them. Now, if they go and check it they find that what Kloeckner Metals through Sid is telling them is exactly what is correct from the technical side.”

Concerning selling, Sid has never been a dollar-sign salesperson. In the triangle of selling where one balances price, service, and quality, Sid stresses that price is actually the easiest part. Price is negotiable. You can go up a dollar or down two dollars, but the product will either arrive at the job site on time or it won’t. The product will either meet specifications or it won’t. For this reason, Sid believes that it is a mistake to try and be the lowest bidder every time.

“If you are the lowest bidder all the time, you lose money all the time,” Sid says. “I don’t sell service and quality for free.”

For someone first starting their career in steel, Sid’s advice is to try and learn as much as you can. To be successful, you need to read everything that is coming out in regard to the product you are selling. Even more importantly, though, you need to love the industry that you work in like Sid loves steel. If you don’t love it, then you are wasting your time.