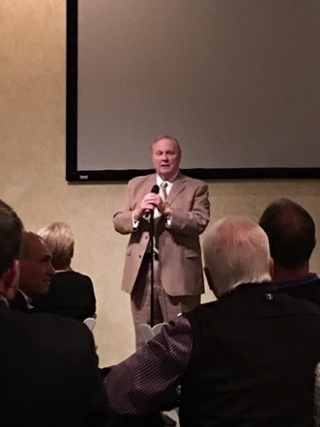 This past December, Jack Delaney retired after 51 years with Kloeckner Metals. Staying with a company for that long is rare, especially these days when many people will end up at seven or eight different companies throughout their life. Jack attributes some of the reason for staying with Kloeckner all these years as a little bit of luck and always having opportunities within the company.

“I always had a decent job, and I’ve had many different jobs in the company,” Jack says. “I was always happy. I was satisfied with what I was doing and having fun doing it.”

Back when Jack started out in 1965, orders were typed on typewriters and calculations were made with slide rules, pencils, and paper. It would not be unusual to take forty or fifty telephone sales calls a day. He started delivering mail internally throughout the office for $45 a week at the Philadelphia plant, which was then owned by the Edgcomb family. Mr. Edgcomb founded the company in 1923 and sold it in 1969. Jack learned a lot from those early days, figuring out the business and the way things should be done.

“Mr. Edgcomb was a guy that started a company from scratch, and built it into the largest independently owned service center in the country at one time,” Jack explains. “There was a series of sayings built around ‘What Is a Customer?’ He drilled that into all of us when we first started. There were signs all over the place about ‘What Is a Customer?’ You were always thinking about customer service and how to satisfy the customer. ‘They do not need us, we need them,’ we were told.”

Jack believes that quality customer service remains paramount to a successful steel company. However, he thinks that this focus has been lost, not by Kloeckner but the steel business in general. Instead of being the first priority, many companies put it as the second or third priority behind things like inventory and cash flow. Jack believes that this is a mistake.

Jack uses an example from his own life to drive home the point. He used to buy just about everything he could from Sears. Then one day, about 25 years ago, he had a really bad experience with a manager at Sears. He hasn’t been back to a Sears since. He believes that most people are like that when it comes to bad customer service experiences, and the people at the company won’t even be aware of the potential money they lost out on. This is why he thinks that all successful companies need to keep focused on quality customer service.

“If you take a look at a company like Amazon, which is strictly digital, they spend a lot of time, money, and training on pleasing their customers,” Jack says. “That is paramount. Then they worry about their selling price second.”

Another thing that Jack has noticed is that some new employees are receiving less mentorship and training these days. He compares that to his own experience where some of the older employees trained him and showed him the ropes. They did so even if they were training him to replace them because they understood that if they did a good job they too would be moving up. He thinks that more focus needs to be placed on developing people and helping them to learn the business.

“You can’t take the smartest kid coming out of college and bring them in, parade them around the office and the plant for three or four days, and then put them on the phone talking to customers,” Jack says. “You’ve got to give them time to learn products, to learn what customers buy, what they make, who is important, and certainly the different product lines that the company has to offer, which in Kloeckner is many.” He does see some real progress at Kloeckner with the recent “On Boarding” programs for new employees being instituted at some plants in the company. “Give a person time and training to learn what they are supposed to do and you’ll be all the less likely to lose them to frustration”.

One thing that Jack is a little disappointed in is the way the business has gone, in that each operation wants to be its own commander in chief, and the plants don’t work together as they used to.

“I used to love talking to the guys at the other branches, and every once in a while we would get to meet and have fun. I did that as an inside sales person, not as a manager. Today you have to be some kind of manager just to meet your counterpart at another branch,” Jack says. “I think that’s something that’s missing. You lose a little something when you don’t have that company camaraderie.”

For this reason, Jack is excited about the prospect of the One Kloeckner program. The program is currently being implemented in Europe. The program is trying to get all of the Kloeckner companies operating in different countries on the same page in many ways, including sales.

“I think that is coming to the United States, and that would be nice to see,” Jack says.

On an individual level, Jack has made it a point to make sure he pays forward the training and mentorship that he received when first starting out. He has done this in a variety of ways, including taking individuals under his wing. Taking the time and patience to train successors is an important job for veteran leadership.

“No one is indispensable, we are more like footprints in the sand; we stay around for a while, but eventually, we are washed away by the incoming waves…. to be replaced by someone else,” Jack explained in his retirement speech. “That’s how the circle works.”

Jack offers some advice for young people just starting out with the company. He thinks that it is important to learn the business, the products, the equipment capabilities, what the company can be good at, and just about anything else you can about servicing a customer. You should try to let things roll off your back, and not let every little thing bother you. Don’t get too anxious. You should also make sure that your feelings are known to your boss. It is important to let them know about your ambitions: if you want to be a general manager, territory manager, vice president, or anything else. Jack says that sometimes they just don’t know because everyone’s so busy they never thought about it. Above all, he says you should try to have fun on the job.