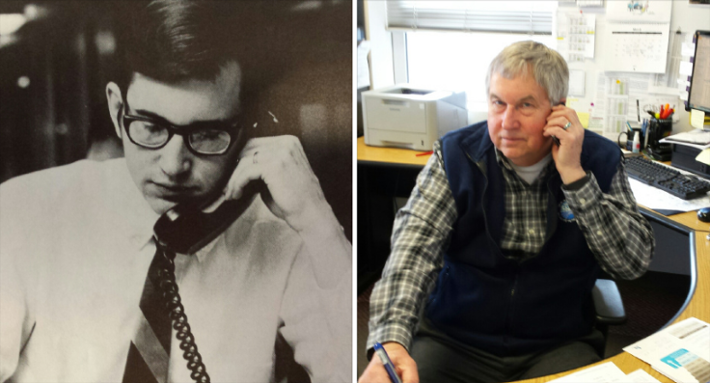 Underneath a moose, a few deer, and several other hunting trophies, John Hall finished his career with Kloeckner in an office just 300 feet from where he started 52 years prior. In 1965, John had just graduated from a local business college when he started working as a service clerk for Edgcomb Steel of New England in Nashua, New Hampshire. His responsibilities included delivering the mail, distributing documents, and keeping the paper supplies stocked. After a few other jobs in inventory management, he managed to make the jump to sales.

“Back then, you had to wait for your chance to get into sales, and you almost had to be part of the clique to get into the sales department,” John says. “I must have played my cards right.”

In 1976, he was named manager of carbon flat-rolled products. As part of a corporate restructuring, he became part of the corporate staff. Still, he got to stay working at the same office in Nashua, just a 10-minute drive away from his house on a good day. This convenience was one perk of staying with the same company for so long, but there was a lot more to it than that.

John learned a lot over the years, which he thinks contributed greatly to his success. Through the company, he was able to take several extension courses. These included the Dale Carnegie Course, a course at the Karrass School of Negotiating, and even a course in metallurgy. Building a knowledge base not only included sales and business topics but also the actual process of making steel is very important in the metals industry. Just a few weeks ago, John was at a get together with some of his friends from the once Bethlehem Steel. One of his friends, an expert metallurgist, paid him a compliment that brought tears to his eyes.

“He says, ‘John, you should have been a metallurgist. At your level, you know how it works with your products better than the kids who are coming out of college today. They understand atomic numbers and things like that, but they don’t know the down and dirty process of steel making like you do,’” John recalls.

John thinks that building real friendships is very important in business. Friends are the people who will help you out when push comes to shove, while others will just walk away. John’s core philosophy is that you get a lot more with sugar than you do with vinegar. He thinks that if you remember these things, are respectful of those around you, and really put your nose to the grindstone, you will be successful in life.

John also says that you should not be afraid to ask for help or to bring problems forward. Most people complain about things behind the scenes, but never bring the problems to the attention of management. John thinks that it is important to air these concerns, making sure that you do it in a way that is helpful.

“You say, ‘I have a situation, and I’d like to know if you can help me.’ Then you present your facts and figures and whatnot. A lot of times that will break the ice and you can move forward,” John says.

Now that John is retired, he plans on spending more time with his wife Maureen of 50 years. In his spare time, he will do some hunting and fishing, as well as helping his son out with his business. An outdoorsman, John kept some of his trophies displayed in the office. He thinks back to when he would sometimes go hunting and fishing with customers and other people in the office.

“That turns into some good relationships,” John says. “You’ve got to let the customer catch the fish, though.”