Online shopping has revolutionized the way the world does business. No longer is distribution limited by physical retail property. For this reason, Kloeckner Metals is for the first time selling products directly to the end user, via Amazon. People can now buy products straight from the manufacturer without having to purchase bulk orders.

The Amazon project is intended to allow craftsmen and do-it-yourselfers to purchase products from Kloeckner that they might not have had access to before. It began in the late spring of 2016, with the first product to be offered being a black metal spring loaded case handle.

“Say Harry homeowner needs a piece of flat bar,” says David Schott, who is spearheading the project at Kloeckner Metals. “Well he’s not going to come to a Kloeckner metals service center and buy a 36 inch piece of quarter-by-one flat bar, but he might buy it on Amazon.”

The idea behind the new project was a natural progression for Kloeckner. Some of the things they were making were simply being resold with a markup. The more hands that touch the product, the more markup you are going to see. Therefore, Kloeckner needed to find a way to sell these products directly to the user.

“We’ve been looking at a lot of the things that we sell to customers, and also looking at the things that are sold online,” Schott says. “A lot of it is stuff that we can either make, or that we make for people who take it and resell it. So we figured, ‘why not just sell it ourselves?’”

Currently, the project is in the early stages. Only one branch is offering products via Amazon, and only a few products are being offered. Within the larger context of the organization, however, it is part of an innovation strategy that is expanding Kloeckner’s online presence.

“This absolutely dovetails into the larger digitalization effort,” Schott says.

This experiment is an entirely new avenue for Kloeckner. Until now, Kloeckner has only sold to manufacturers and resellers. Dealing directly with a consumer is an entirely different kind of sale.

“Normally it’s a business to business sale,” Schott says. “We’re usually selling to people who are either putting our products into their products and then selling those items, or we’re selling to a reseller.”

Making the transition to selling directly to the end user has been a learning process. The logistics of making a sale, packaging the product, and sending it out all had to be figured out. Setting up the amazon account itself provided challenges as well. Because Kloeckner sells in many states, the tax structure had to be set up.

Kloeckner also had to figure out how to satisfy Amazon’s requirement for a UPC code. A reseller would already have a UPC code from the initial transaction with the manufacturer, but as a manufacturer, Kloeckner had to approach it differently.

“When you are the manufacturer, you have to purchase UPCs or go through this lengthy process of telling Amazon why your products shouldn’t have a UPC,” Schott says. “That was the first route I went, because I didn’t want to have to go out and buy UPC numbers.” After running into difficulty with the time it was taking, Schott decided to buy some UPCs.

Now that the products are up and being sold, this is just the first step in the larger project to sell directly to consumers online. The first issue is developing a reputation within Amazon customers.

Building a reputation takes time. Buyers usually prefer sellers with high ratings, and good reviews. One way to attract more buyers is with sale pricing, which Kloeckner is pursuing. Another way is increase the amount of products being offered.

“We’re going to hopefully list some more products, some different items, and see what sort of reaction we get,” Schott says. “We want to see where it takes us.” 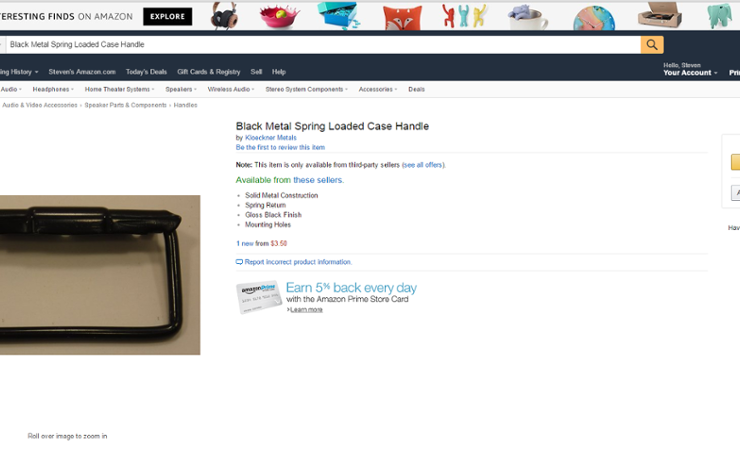