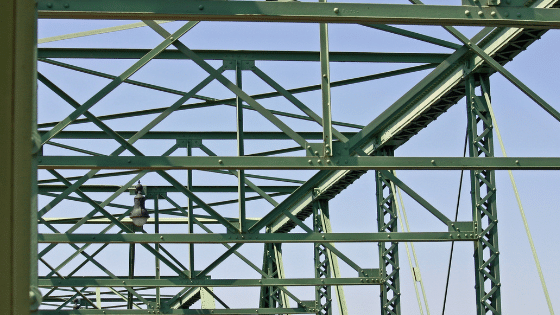 What is the difference between an h-beam, w-beam, and s-beam?

Steel beams—like the h-beam, w-beam, and s-beam—support heavy loads. In fact, they make up the most common component of structural framing systems. They can be used to build bridges, warehouses and other large buildings, and can even be used in machinery or to frame truck beds. Beams can be positioned on their sides or at an angle and connect to columns via bolts, welds, and beam supports.

The American Institute of Steel Construction (AISC) sets the technical parameters for each structural steel shape. AISC’s definition for a beam is, “a horizontal or inclined structural member that carries a load and is supported at two or more points.” Sounds simple enough.

The first step in understanding the distinctions between different beam types is to understand what all these letters mean, and what goes into naming steel beams.

Which beams are right for your commercial project? Kloeckner Metals is a full-line metals supplier and service center that is proud to supply a range of beam grades and dimensions across North America. Download our structural plate spec sheet and check what Kloeckner Metals routinely stocks.

How are beams named?

Some of the most frequently asked questions about steel beams concern how beam shapes are named. What do the names tell us about the structural shape? Broadly, the names given to beams and other structural steel shapes refer directly to the product’s shape, cross section, or quality.

Excepting the T-beam, every steel beam has a vertical section called the web, and horizontal sections at the top and bottom of the web called legs or flanges. This forms the shape of an uppercase I, or an uppercase H, depending on how the beam is rotated.

The “S” in S-beams means “standard,” and the “W” in W-beams means “wide flange.” The I-beam is a type of standard beam, and H-beams are a type of wide beam. Read more about what is an I-beam.

These are the factors that will influence naming:

Beams’ unique geometry and high strength make them capable of resisting shear stress and bending, and they are extensively used for general construction and civil engineering. But the exact application will depend on the specific geometry of the beam. For example, beams can act as critical support columns in large building construction. These are referred to as H-Piles, bearing piles, or HP-beams. They tend to be heavier and thicker than either S- or W-beams.

Therefore, a few considerations to make when comparing beam types include the metal type (aluminum vs. carbon steel), metal grade, size/dimensions, mechanical properties, and the relationship between the web and the legs on the beam.

What are the parts of a steel beam?

The vertical web and the horizontal legs/flanges make up the basic beam parts.

As with other structural steel shapes, the flanges on beams can taper. This creates a slope on the four inner corners where the legs connect to the web, making it thicker there than at other sections on the beam. This slope extends along the legs to form a rounded edge.

Legs can also be parallel or untapered, which creates blockier edges from uniform thickness around the beam. When legs are tapered, they better resist bending due to greater thickness at critical points on the structure. However, their rounded ends make joining to other structures more difficult, and engineers might opt for a W beam instead. 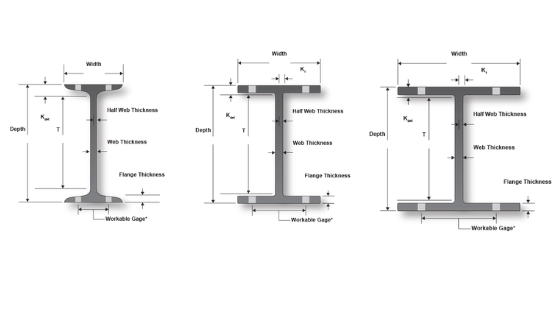 In this AISC illustration, the S beam is located on the far left. The W beam is in the center. And the H-beam is on the right.

Examining the S beam (sometimes referred to as the American Standard Beam) you’ll notice that tapered legs is one its main design differences. Where W- and H-beams have even, blocky angles where the legs meet the web, S-beams are rounded. And they are always rounded. Its slope of 2:12 (approximately 16.67%) on the inner flange surfaces is one of the key characteristics of S-beams.

The width of the legs is another key characteristic for S-beams, as they are narrower than both W- and H-beams. Lastly, S-beams are available in the smallest size range. S-beams are most commonly found in the construction and shipbuilding industries.

The W in its name refers to “wide flanges.” The main difference between W beams is that the inner and outer flange surfaces are parallel. Furthermore, the overall beam must have a depth that is at least equal to the flange width. Usually, its depth is significantly greater than its width.

One of the advantages of W beams is that the flanges are thicker than the web. This aids in resisting bend stress.

Compared with H- or S-beams, W beams have many more standard sections to choose from. Given they have a greater range of sizes (smallest is W4x14 and the largest is W44x355) they are also considered the most commonly used beam in modern day construction worldwide.

H shapes are the largest and heaviest beams available and can tolerate larger weight loads. They are sometimes called HP, H-Piles, or bearing piles, which stems from their use in underground foundation support (load bearing columns) for skyscrapers and other large buildings.

Similar to W-beams, H-beams have inner and outer flange surfaces that run parallel. However, in H-beams the width of the flanges is approximately equal with the beam depth. The beam also displays an even thickness throughout.

Beams serve as the basis for support in many constructions and engineering projects. They are just one structural steel shape, but with various beam types available, it’s good to be able to tell them apart.

Forget the differences between H-beams, W-beams, and S-beams. What do they have in common?

H-beams, W-beams, and S-beams are all types of beams. Beams in general are chosen for their capacity to bend under high stress rather than buckle. Most beams use structural steel or high-strength, low-alloy steel fabricated by a structural steel fabricator. You’ll find different kinds of beams in a wide range of applications, including building frames in construction, bridges, and general structural purposes, with the type of beam determined by the specific application.

Which beams are right for your commercial project? Kloeckner Metals is a full-line metals supplier and service center that is proud to supply a range of beam grades and dimensions across North America. Kloeckner Metals combines a national footprint with the latest fabrication and processing technologies and most innovative customer service solutions. Contact our qualified team today.

There’s a lot to be proud of in the Palmetto...