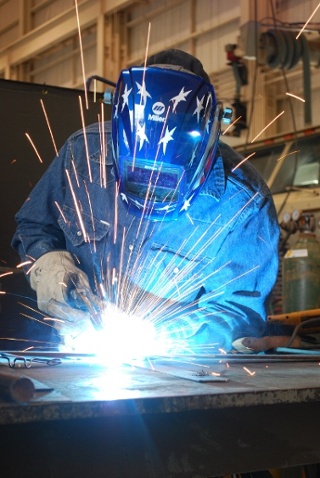 A welding career at one of Kloeckner Metals’ many branches can offer rewarding challenges and opportunities above and beyond repetitive mill work. Kloeckner Metals York’s welding team consists of Jeff Jones, Cain Adamson, and Charlie Gardner who were gracious enough to share some of their first-hand experiences. One thing that makes welding work at Kloeckner unique is the one-off orders that come in. With these orders, the team has to work through the process and figure out the best way to go about the work.

“It’s a pretty good job,” Jeff says about welding at Kloeckner. “It’s very challenging, as opposed to being at a mill where you are constantly doing the same thing day in and day out.”

The ad-hoc orders, in particular, require skill, planning, and teamwork from the welding team. One project that stood out in the welders’ minds was a large plate stacker that they made. The scale of the piece of equipment was huge, which made the logistics of the project particularly challenging.

“There were a lot of moving parts,” Cain says. “Basically everything on it was monstrous. You are working with huge materials.”

“We had to really think through it and reach back to experience with previous things to come up with a plan, talk about it as a team, and then execute that plan,” Jeff says. “You have to angle those parts into position on this piece of equipment and you have to be intimately close to it. So you really have to think about how you are taking it up, and how it is going to be adjusted, with some really intricate rigging with the crane and straps and beams and stuff like that. That was my favorite part of the thing, actually assembling it.”

With projects like this, the skills of the welding team really show. Jeff and Cain both got their training at weld school, while Charlie learned to weld during his service as a Marine. The three stress the importance of fundamentals in making a good welder.

“A lot of people look at welding as a huge picture, but there are a lot of small things that go into it that which make a good welder or a bad welder,” Cain says. “My dad owns his own welding company, and my mom was a welder. So I went into weld school sort of having a bigger head with what I thought I knew. It’s a real big eye opener.”

Besides technical skills, it is important for welders to have a good attitude and work ethic. Welding is a job where a person has to be able to work well both as an individual and on a team. Everyone on the weld team works hand-in-hand with each other, so you need to develop a good working relationship. In a good team, the members challenge each other and push each other to get better.

“I think everyone feels like their contribution matters and we’re all in it together and we don’t want to let each other down,” Charlie says

“That’s a huge aspect,” Jeff says, “because our guys that work here, especially my group, we are very good people, we have a good work ethic, go out of our way to work together, and have a real cohesive team effort.”

A typical day at for the York welding team starts with a 15-minute meeting. The welders talk about the tasks for the day, anything outside the norm, and how everyone’s evening went. After that, they go out and see what the parts situation looks like. If they are following up on a project from a previous day, usually there is little set up time required. For new projects, a teardown and new set up will take some time. Then everyone gets rolling and sets the pace for the day. As things come up, the team addresses them.

“For example, today we had a first article inspection on a part that we are going to be building going forward here,” Jeff says. “We had the customer in and all the guys have some contribution that could end up welding this part, so I try to keep them involved with that so if they have any questions, comments, or recommendations they can air those. We all try to stay together on things so we all get a little perspective from each other.”

Though there are some downsides to welding, mostly how hot it can get wearing long sleeves and protective gear in 90-degree heat, the Kloeckner Metals York welders really enjoy their work. The ability to actually make something is a reward that not every job gives you. Furthermore, because Kloeckner is organized into branch level shops, the branches don’t have the normal feel of a large corporation. They have a “mom and pop feel,” as Charley puts it.

“I like that aspect of it. You aren’t walking into a big company where you are just a number,” Cain says. “You come in and it is a tight-knit family. If something is not going well, you have people who understand what is going on. People want to give you a second and third chance, help you out.”

For new welders considering a career at Kloeckner, Cain offers this advice: “Coming in as a welder you have to have an open mind because as much as you don’t like to say it, oxyfuel cutting and plasma cutting are kind of on our resumes. There’s always room for improvement.”