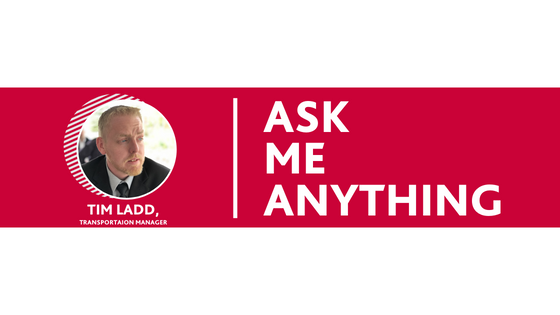 Ask Me Anything with Tim Ladd

This round of Ask Me Anything took us to Kloeckner Metals Indianapolis. We got to chat with Tim Ladd, Transportation Manager, who’s got steel running through his family tree. Tim has worked his way up through the ranks at Kloeckner for the past 17 years, and we got to chat about the good, the bad, and the ugly our industry faces as we all continue trying to attract and retain a younger generation of leaders.

Lauren Wiggins: We usually kick off our AMAs by asking about your first job. Today, we’re changing it up because, as I understand, you’re third-generation steel! We gotta know, what’s that like? Did you feel pressured to get into this industry, or did you know this is where you’d find purpose?

Tim Ladd: Well, technically, my first job was managing a Blockbuster Video. I know that shows my age.

LW: That’s cool! No hate here. I miss that place.

TL: But yeah, I went to school for a little bit, and it wasn’t for me. So my father, who recently retired with Kloeckner, told me if I wasn’t going to go to school, he was going to find me a job. And he found me one up at Kloeckner Chicago. The opportunities just kept rolling in now it’s my career.

LW: Nice, father knows best…and he didn’t want you sitting around in his air conditioning without a job. 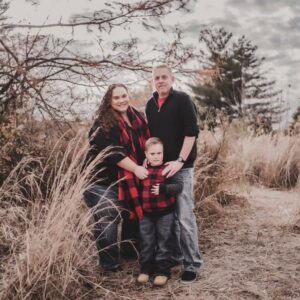 LW: I understand that; you’re a product of the culture you grow up in. Now you’re the Transportation Manager in Indy, right? Tell us about your roles over the last 17 years.

TL: I started as a Billing Clerk for Chicago, handling all the bill of lading stuff, working 3 pm – 11 pm shifts. A few years in, we had to make some changes to the whole company, and I moved into an everything role to fill in where I could, got to learn some sales things. And I still know to this day, the more I retain, the more I gain, and the more valuable I am. Now, I’m Transportation Manager, but I’m also acting Assistant Operations Manager. That’s my next big step.

LW: Awesome! Yep, can’t get rid of the guy who knows the whole business. Okay, let’s get into the important stuff – what’s your go-to music genre? What’s your favorite band or song?

A Man of Music, Growing Up Lower Middle Class

TL: I don’t know if you knew how big of a question this is, but music is a huge piece of my life. So just a little note about me. I was a band geek in high school. I was a drum major and a handful of instruments. I played in a four-man band. I played bass guitar.

LW: Good deal. I’m excited for your answer, even though I cannot play a single instrument.

TL: My old man introduced me to Classic Rock at a young age, but Progressive Rock is my favorite. I’m a big fan of Coheed and Cambria. Claudio Sanchez is one of my favorite writers…I follow his comics. I love Tool; Maynard James Keenan is one of my favorite singers. I got to see him three years ago, and that night was the best night of my life, aside from my son being born.

LW: Understandable; Maynard doesn’t make a bad product. I like moody synth, so I’m into his Perfect Circle stuff. Okay, back to the work questions. You started your Kloeckner career as a Shipping Coordinator, and now you’re a Transportation Manager. What’s the difference between those roles, and how did you end up in Indy? 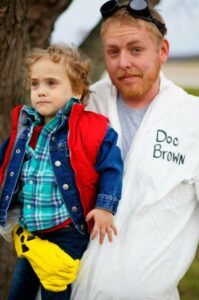 TL: Honestly, I started in shipping because that was what they needed to fill. Everything else has just sort of fallen into place, and I got the opportunity to transfer to Indy because they needed someone to step up. At that point, I knew I wasn’t going back to school, but I also knew I didn’t want to be a Billing Clerk until I died…so I raised my hand and started learning everything I could.

Ultimately, I grew up lower middle class and then got married and had a kid, and that’s what drives me. I want to provide more for him than I got as a kid, even though I wasn’t neglected or anything. I do everything for my family.

Forging Ahead: The Future of Steel

LW: I’d say that’s pretty wonderful motivation. Okay, here’s a good one! We met for MSCI’s Forge Ahead conference in Chicago for Millennials and Gen Zers in steel. What do you think we need to do as an industry to ensure strong performers are strong enough to inherit the steel industry in the next 10 years?

TL: A few years ago, I wouldn’t have had an answer for you. Meeting the group of people that I met in Chicago gives me hope, especially meeting people within our own company. I suggest everyone learn what they can while the veterans are still around.

LW: Right! Because you take pride in what you do, I believe it’s a two-way street; the generation that’s about to retire needs to make time to mentor.

TL: That’s the key word – pride. Taking pride in your work goes a long way. Make mistakes, but always learn something from them and try to make sure they don’t happen again.

LW: Amen. Here’s another fun one! Do you have a hidden talent? If not, what’s your greatest passion/hobby when you’re off the clock?

TL: Well, I like to golf and play video games, but thinking about a hidden talent that nobody knows about me, I go back to the band geek stuff; I am proficient in Saxophone – first chair. I still know everything about that instrument.

LW: Cool, I’m a big fan of “Urgent” by Foreigner. Okay, back to more work questions. Do you mentor anyone at work? What’s the most important message you try to impart to mentees or new hires? 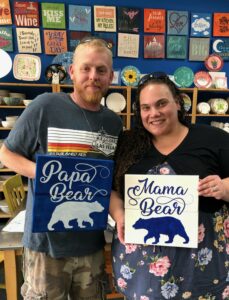 TL: Whenever I get a new guy in here, I tell them, hey, learn everything. You can grab the guys that have been here forever and just listen as much as you can. Financials are also a good thing to focus on. Nobody really told me about 401k and pensions, so I try to pass along any information I have. Even in hiring, I try to explain that benefits are more important than getting an extra dollar per hour.

LW: Exactly. You can make a dollar more per hour, but that’s not helpful if you’re still paying for your own insurance.

Rising to the Challenge & Writerly Heroes

LW: I’m finally learning about that myself. Okay, what’s the biggest, most important change you’ve been part of in your time at Kloeckner, and why?

TL: Coming to Indianapolis. We won’t go into the specifics, but some things needed work. I saw an opportunity to clean things up and a path forward for myself. We’re not perfect by any means, but we’ve greatly improved efficiencies. We’ve had record years for several years, and I would never have thought that was possible when I first got here. I’ll always carry that accomplishment with me and feel I’m still working on that big change.

LW: Nice. Tell us about your hero, a leader, or a public figure you admire – is there a principle they stand for that you’ve adopted as your own, or something in their work that inspires yours at Kloeckner?

TL: I thought about this for a while. I’m a big Stephen King fan. I’ve read his books inside and out, and there’s a quote from his book about writing…I wrote it down so I wouldn’t mess it up. ‘The scariest moment is always just before you start. After that, things can only get better.’ I’ve taken that with me through the years because that’s how I start every new task.

I also like Kevin Smith, and he’s pretty inspirational.

LW: Rock on, I love both of those people! We’ve entered the family portion of our interview – what are your responsibilities at home? Is there a fun activity/tradition you enjoy together? 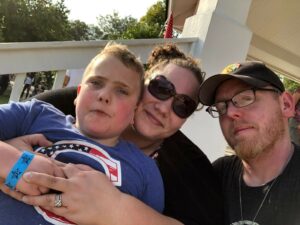 TL: I’m the workhorse of the family. My wife is a stay-at-home mom. My son Mason was diagnosed with autism shortly after his birth. We decided to keep him at home instead of figuring out who would care for him daily. She does some childcare to help supplement the income, but I enjoy being the provider.

Oh, and if something needs to be fixed around the house, I get on YouTube and fix it.

LW: Absolutely, you can DIY anything now with the videos you find on YouTube. Save the money!

TL: Yeah, I grew up poor; I don’t call people for my problems.

As far as family fun goes, my son loves water. We have an array of sprinklers, pools, and slides when it’s hot. Anything that makes him smile is pretty much the activity I love.

He’s definitely opened my eyes to a whole new culture that you really don’t know about until you’re in it. It’s almost like a support group of parents. We all have kids on the spectrum, and they all have their different things

LW: That’s beautiful. I’m happy to hear your family has such a strong support system.

Alright, we’ve got one last question. If you could turn back the hands of time and do one thing differently at any point in your life, what would it be, and why would you change it or not?

TL: I actually had a really good answer pop into my head for this one. If I could go back and do anything different, I would have learned a trade. When I was in high school, the emphasis was placed on going to college. Nobody told me I could go learn welding or pipe fitting. There’s a whole world of traders that can lead you to a career without having to go to college, and I wish someone would have put that in front of me.

LW: I couldn’t agree with you more. Trade interest is at an all-time low because it’s not being marketed right. What trade would you have picked up?

TL: Maybe carpentry? When my nieces and nephews get to the right age, I’ll push trades. My brother-in-law was 18 years old when I married his sister, and I took the opportunity to tell him not to count those out. 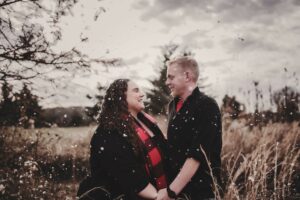 TL: Yeah, but trades are not just for mess-ups. They’re not careers for people who can’t do anything else. They’re legit careers that will take you somewhere.

LW: That’s right, and we’re in serious need of those kinds of skilled workers now because a whole generation was sold the benefits of college, whether it worked for them or not.

This was a great interview and so topical for the industry at large right now. We appreciate the many and plenty of things Tim has done for our company, and we thank him for taking a little time to speak with us.

If you or someone you know is ready to take a leap into something new, we’re hiring for all kinds of positions in many locations. Check out our current opportunities!