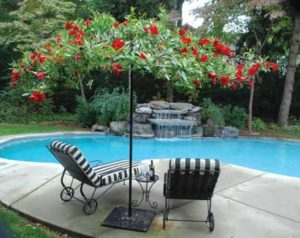 on the heads of those enjoying the backyard.

“The idea was that we wanted to make it beautiful and mobile,” says inventor Dave Tilley, CEO of Living Canopies and associate professor at the University of Maryland. But the key is strength. “You have a container of soil that can fill with water, so there is going to be quite a bit of weight overhead. And it has to able to withstand high winds. So we needed the strength of steel.”

Tilley first came up with the idea for the Living Umbrella beneath the unforgiving Las Vegas sun. He was by his hotel’s pool, which didn’t have any shade umbrellas. That’s when he noticed guests were huddling in the shade provided by the few plants decorating the area. Tilley says he researched several metal companies about providing the steel frame and no one volunteered until he connected with Dave Schott, operations manager for Kloeckner Metals in York, Penn. 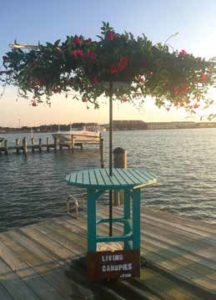 In addition to the shade provided by the plants, the Living Umbrella is also able to cool the air around it. Through the process of transpiration, the process by which the plants

pull water from the soil and release it into their leaves, the plants draw heat energy from the surrounding air. Through this process, the plants can actually lower the ambient temperature by upwards of five to ten degrees Fahrenheit.

One of the popular plants currently being used in Living Umbrellas is the Mandeville vine. In addition to being a beautiful, tropical flower, the Mandeville also creates a great habitat for hummingbirds. Beyond flowering vines, which are popular for their aesthetic qualities, the Living Canopies team is also experimenting with various other plants.

“Depending on the species you use for the plant, you can do an edible plant like a green bean or grape, and we’ve even tried some hops that you use to make beer with,” Tilley says.

So far, the canopies have been installed in restaurants, hotels, homes and on the University of Maryland campus. The umbrellas have also been featured on garden shows

Article can be found here: https://aquamagazine.com/images/digitalissue/0218/