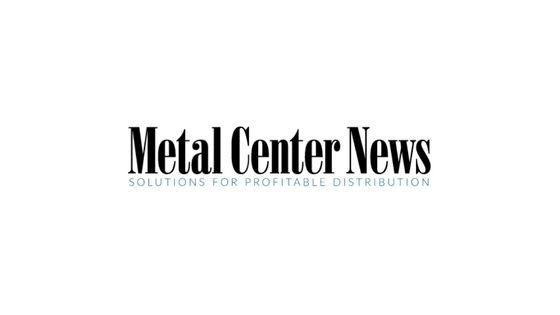 Eddie Lehner, Ryerson’s president and CEO, made an impassioned case for the role of the service center at August’s Steel Summit. He was asked about the specter of mill merger and acquisitions activity and its potential to collect distribution businesses along the way.

“Look at Amazon. Look at Grainger. Take it away from our industry. Is this not the age of ‘How do you get product across a wide expanse of what your customers need, providing logistics and support?’ he asked the audience at the Steel Market Update event in Atlanta. “I would argue rather than consolidation being a threat, we live in an era of distribution.”

His co-panelists in the distribution discussion, Mill Steel’s Pam Heglund and Kloeckner Metal Corporation’s John Ganem readily agreed distribution will continue to have a place in the supply chain, regardless of what producers do.

“Consolidation is happening, and has been happening over the last five, 10, 15 years. We don’t spend a lot of time talking about it on our executive team, just like we don’t spend a lot of time on what steel prices are going to be, because we don’t know,” said Heglund, president of Mill Steel, Grand Rapids, Mich. “If we do our jobs and make our customer experience as good as possible, our future is secure.”

“If you’re engaged in the way we are and are focused on creating value, I think we have a strong value proposition and it’s only going to get stronger over time. We want to be part of the solution,” said Ganem, CEO of the Roswell, Ga.,-based service center company.

The panel wasn’t just bullish on the long-term prospects for the distribution business, but are confident they’ll manage through the current business climate just fine. “We always have to manage these cycles, good and bad. If you look through all that, you have to conclude that we should have optimism for what we do,” Lehner said.

For any service center operator today, one of the chief challenges is attracting and retaining employees, particularly as the pandemic has changed the way many employees view work.

At Mill Steel, Heglund’s doubts about the efficacy of remote work was not validated, leading to a new approach.

“I was very skeptical. They worked from home and proved me wrong. When we came out of the pandemic, we decided to do a flexible work schedule against my recommendation, but it’s worked out really well for us,” she said. “If there are issues, we’ll bring everybody back in.”

Ganem said the entire industry has changed in its relationship with the employees. “Five years ago, we weren’t talking about the employee experience. There has been a structural change to the labor force, particularly from a generational perspective. To attract people into a manufacturing environment, we have to completely re-evaluate our perspective and strategy toward employees.”

In many ways, that becomes about developing culture. And culture is not something that’s necessarily delivered from the top down, but grows more organically and requires constant attention, he added.

Of course, the use of new technology must continue to take place to keep the industry healthy and profitable. Each panelist has made adoption of technology a crucial element at their companies and offered thoughts on how it can be done.

Lehner noted there are numerous levels of innovation, including the latest steps in additive manufacturing and making each machine in the plant “intelligent,” where each piece tells you information you need to know. But something like block chain can be used to identify how streamlined your order fulfillment process is. “Does it take 20 steps in SAP? Can we condense that to get it down to four or three?” he asked.

Heglund said her management team has grown tired of her mantra to employ the latest digital innovations at Mill Steel. “We have to become a technology company. Yes we sell steel and buy steel and process steel, but the customer experience is going to be based on how we bring that technology forward to them to make it easier for them to buy from us.”

“The key to transformation and embracing technology is to not be afraid of the changes. Also to fail fast and adjust your strategy. It’s a constant process to be going through,” Ganem said.

Ultimately, Lehner said, everything a service center does, or doesn’t do, should be undertaken with a single thought in mind – properly serving the customer. He noted that Ryerson had more than one million orders filled in 2021, and he wonders how those metal buyers would rate the exchange.

“The real question I’m obsessed with is how many of those were great experiences for the customer. How many times did we pull quickly and meet our lead times? Would somebody come back and buy from us?” he asked.

“To me, it’s a healthy obsession.”

Hot-Strip Capacity a Non-Issue
Paul Lowrey, president of Steel Research Associates, has a contrarian take on domestic overcapacity in the steel industry. He doesn’t believe it exists.

Now, and in the years to come, U.S. steelmakers are expected to substantially increase their production levels through major investments. It has started in Sinton, Texas, where Steel Dynamics is ramping up its 3-million-ton flat-rolled mill. It will be followed by projects at Nucor Gallatin and North Star BlueScope, followed by still more expansion projects at Big River Steel and another Nucor site in West Virginia.

His answer is “no.” Through reductions in capacity elsewhere, such as U.S. Steel’s Granite City facility, the net capacity is actually decreasing. “In 2025, we will have less hot-strip capacity than we did in the Year 2000. That’s commensurate with a reduction in steel demand.

Lowrey characterizes this “replacement capacity” as a consistent pattern throughout 150 years of the domestic steel industry, with older, outdated production steadily replaced by more state-of-the-art mills.

An interesting side note to these new plants is their location, he said. Sinton is located near the Mexican border, Nucor and Big River on major rivers and North Star’s near Detroit. Throw in Nucor’s acquisition of California Steel Industries and the potential for growth there, and these sites are in proximity to the four major U.S. ports.

“I don’t think it’s farfetched to say the new capacity is going to be more competitive to imports and is going to reduce import levels,” Lowrey concluded.

Should these new facilities make a meaningful dent in import penetration, the U.S. industry could be looking at capacity utilization rates in the mid to high 80s five years down the road, approaching the highs of 2021 that contributed to the exorbitant price for flat-rolled. “Despite all the headlines the new capacity is going to ruin the industry, it’s not going to happen. It’s the opposite.”

While Lowrey was tossing water on any overcapacity fires, the construction will have a significant impact on one area of the steel supply chain. Since much of the new capacity planned for the U.S. will employ electric arc furnaces and make flat-rolled steel, it’s going to put a terrible strain on the prime scrap supply situation.

Lowrey noted that flat-rolled EAF mills have a higher-quality metallics requirement than long product makers. Prime scrap is the preferred input for EAF flat-rolled mills, or a scrap substitute such as pig iron or HBI/DRI must be used.

“Prime scrap is the issue. We don’t have enough of it and we haven’t for several decades,” he explained.

Prime scrap is a byproduct of manufacturing, with stamping plants serving as the biggest supplier. Mills themselves have also been major contributors, but both sources are curtailed through gains in productivity and efficiencies, while also limited by existing production. “Unless steel demand increases markedly, we don’t have new scrap supply.”

The solution to the issue isn’t simply keeping all of the material we export at home. Only a small fraction of the country’s exported material is prime scrap.

Furthermore, the global push for decarbonization will shrink the supply of imported prime scrap. Canada has long been the biggest source of imported scrap, but Algoma’s transformation to EAF production will soak up a lot of that material. Europe is even further along in a green steel movement, which will further shrink available imports.

The producers recognize the issue and are acting accordingly to grow their access to domestically sourced scrap substitutes. In the last 10 years, homegrown metallics production, including pig iron, HBI and DRI, has expanded from essentially zero to 7.5 million tons.

The demand side of the steel equation is a lot less interesting, Lowrey noted. Consumption for hot-strip products generally sits in a band between 60 and 70 million tons annually, and there’s little reason to expect the next few years will deviate from that narrow space. “I don’t think you’ll see anything substantially more than that or substantially less,” he said.

Barring the dramatically unexpected, which has sadly become the norm the past two years, Lowrey pegs the base price for hot-rolled between $750 and $1,000 in the coming years.