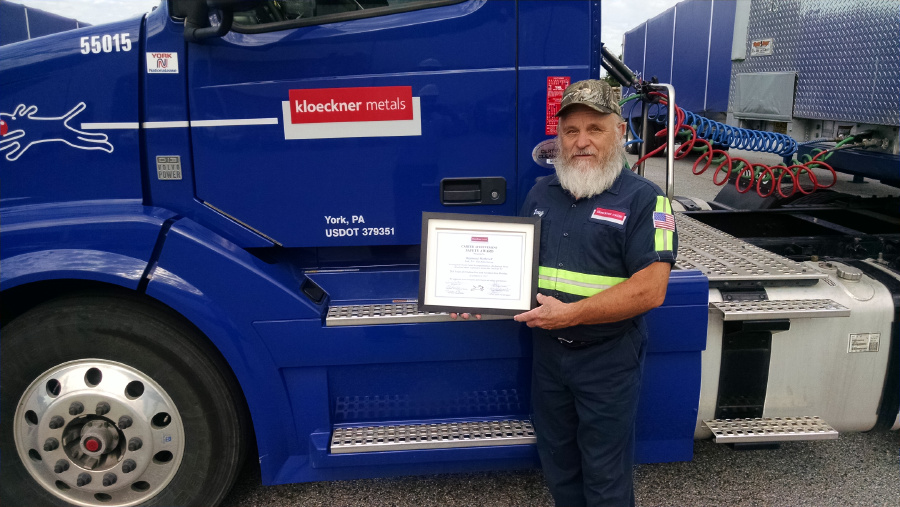 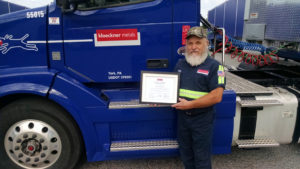 Truck driver Raymond Metherell is retiring after over 20 years of accident and citation free driving with Kloeckner Metals. He takes great pride in his safe driving record, for which he has received many awards. Raymond started at Kloeckner in 1996 and was driving a truck even before that.

“I really enjoy driving a truck,” Raymond says. “My dad did it and I always wanted to do it. So way, way, way back, I started driving a truck when I was 16.”

Over the years, Raymond has had some crazy experiences on the road. Driving in Lancaster County, there were times that the road would be blocked from cows and horses that broke out of their pen. He would pull over to the side of the road to help the farmer get the animals off the road since he “wasn’t going anywhere anyway.” On another occasion, Raymond’s truck got stuck in the snow and he didn’t have a shovel.

“I had to dig a whole tractor trailer out by hand,” Raymond says. “The whole front of the truck and then the whole way back to the trailer tires I had to dig out so I could pull out. I vowed to myself right then it would never happen again, and everywhere I go I always have a shovel strapped to the back of my truck.”

One of the things that Raymond says he will miss the most is the relationships with clients that he developed. On one recent trip, he brought a bunch of pecan delights with him. These are triple chocolate cupcakes with pecans on them, and you can throw them in the microwave for 30 seconds to make them extra tasty.

“They were just tickled to death by it,” Raymond says. “That’s the thing. You get a good customer relationship. That’s what it is all about.”

Raymond always has prided himself on being a safe and thorough driver. His motto is that “if you do it right the first time, you don’t have to worry about it.” During pre-trip and post-trip he will actually crawl underneath the truck to check and make sure everything is in order. He prefers using chains to straps, explaining that straps will do in a pinch but they aren’t ideal. He enjoys hard work and his record proves it. Once he delivered 23 stops in one day.

“I had some bodacious loads that most guys would cringe over, and I just went ahead and chained stuff up, did the job, and got it done,” Raymond says.

Raymond has some advice for new drivers. He explains that the biggest thing is to keep an eye on your tires and keep the air pressure correct. That will get you better mileage and make it easier to drive. He also says that you have to watch out for other people on the road. If you are at a stop light and it turns green, check to make sure that no one is coming before starting. A lot of people are on the road and not all of them are paying attention.

“You get a sixth sense,” Raymond says. “You can tell what somebody is going to do even before they do it out on the road.”

Raymond says that he had to think long and hard about retirement, but finally decided that it was time for him to move on to the next level. He is going to miss the people he has come to know, and the job itself. One of his friends who also used to be a driver for Kloeckner gave him this advice.

“He said, ‘Your last day, the last time you pull into that parking lot and park that truck, let me know what you’re thinking,’” Raymond says. “That floored me because I never thought of it that way. The last time you’re getting out of the truck and that’s the end of it. That was really hard to swallow.” 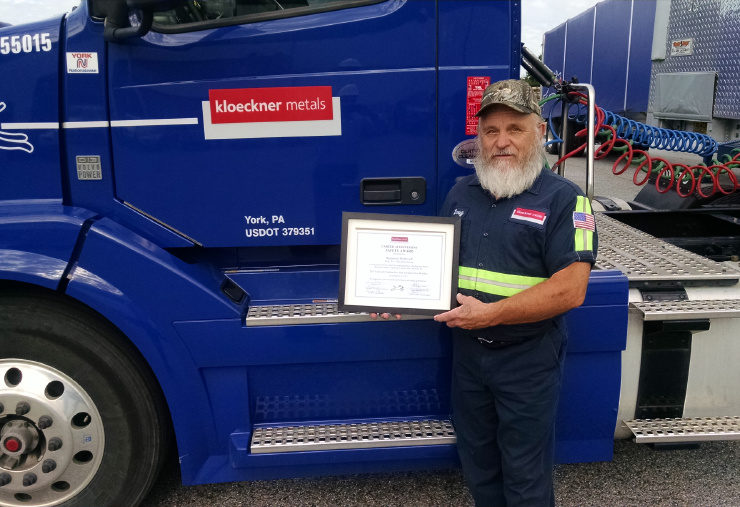 In honor of National Safety Month, we decided to put...

06.21.2022
What is the Difference Between Direct Chill & Continuous Cast Aluminum?