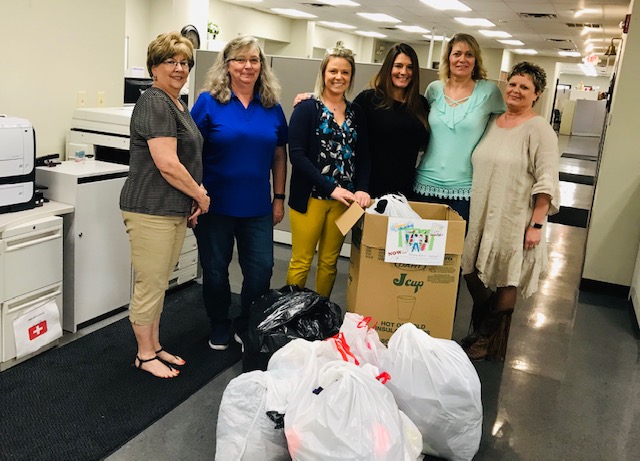 Kloeckner Metals’ Tulsa Branch recently held a clothing drive as part of the KloecknerCares program. The donations were taken to Catholic Charities of Eastern Oklahoma, which offers a variety of services for the needy in the Tulsa area.  Founded in 1951, the organization has a clothing facility, a food facility, immigration services assisting individuals trying to get citizenship, adoption services, and much more.

“We wanted to get people involved and help a charity that is a football field away from our building all at the same time,” said Inside Sales Representative Kendall McDonald.

The idea for the clothing drive came after Tulsa finished up the Kloeckner Biggest Loser competition. Figuring some people might have some clothes that no longer fit and with spring cleaning underway, the branch thought it would be a great opportunity to help out. Many people brought in clothes, shoes, and even some kids items.

“We have been trying to come up with some things that we can do in-house without asking people for cash handouts,” Kendall said. “For a small office, we had a pretty good turnout.”

In the past, the Tulsa branch has been heavily involved with helping out local Springdale Elementary School. They had a “hats, undergarments, gloves, and socks” (HUGS) clothing drive for the school, and also had volunteers going over to read to the children every week.

That is one reason why the branch has started trying to think of charity opportunities which do not require such an intensive time investment from employees. In that vein, they are considering doing a food drive this summer to help stock the Disabled American Veterans. Then in the fall, they are thinking about doing a “coats, hats, and gloves” drive to assist a local homeless shelter.

“We have three or four people who have been really involved in trying to come up with ideas and find things that we agree on that we think we can handle without interfering too much with our day-to-day operation,” Kendall said