Even After 20 Years, David Davis Wakes Up Wanting To Go To Work

It’s Saturday morning and David Davis is up making his legendary biscuits and gravy from scratch. He’ll fill up a large turkey roasting pan and bring it to Kloeckner Metals Tulsa for everyone working in the shop today. It’s a breakfast no one expects and everyone treasures.

David has been a standout Account Manager for 20 years. Surprising, fun, and compassionate acts shape the relationships David holds so dear. “This place here is definitely like a family,” David says. “When someone is sick or out or has a birthday, they are taken care of.”

It Starts With the First Interaction

In 2000, David tried to sell a car to Bob Welter, then the Vice President of Baldwin Steel. He asked thoughtful questions and paid close attention to what Bob was looking for.

But Bob didn’t buy the car. Something even better happened.

Bob asked for David’s business card and said, “I want you to come and work for us.” Two weeks later, David started at Baldwin Steel (now Kloeckner Metals).

“I never in my life thought I’d be working in the steel industry. Now I know a bit of everything.”

Reach for the Miracle and Listen

One of David’s favorite memories at Kloeckner Metals is from the first months of his career.

He walked into a K-Mart and noticed the big boxes on the floor next to where workers were building new shelves. So, he looked up the manufacturer on the box and called them. On the phone, he was honest about being new and emphasized that if he couldn’t answer their questions, he would find someone who could.

This was exactly the compassion that Bob spotted at the car dealership in his very first interaction with David.

David trusts that, “If you listen, you gain knowledge. You make sure that the phone calls with customers are never just about business. Get to know their families and ask about them.” Some of the partnerships he built during his first years at Kloeckner Metals have lasted to this day.

David knows that at Kloeckner Metals, friendships form that withstand the test of time—and new technologies. He’s 62 now and jokes about the upsurge in technology use, especially during the pandemic. Having a team that will help him learn how to use Teams is special.

“They are patient with me,” David says, “and there is always someone willing to help.” That “someone” teaching him how to share his screen or turn on his video may even be the Commercial Director Grant Cousins or the Sales Manager John Muse, both of whom have an open-door policy, welcoming anyone in when they have a question.

Feeling comfortable is a key reason David loves working at Kloeckner Metals. After a call goes well, he might do “The David Dance,” “and, it’s ugly. Kind of like the Elaine dance on Seinfeld.” Then there was that time when the office put together a book of quirky things he says, and called them “David-isms.” That was 15 years ago, but new ones are still added to this day.

He’s kind of the go-to guy in Tulsa. If you call the 1-800 number, you’ll probably speak with him. Make sure if you do, you ask about those biscuits.

Our 20 Years With Kloeckner series features employees who have been with Kloeckner Metals more than 20 years. Who are they? Why do they stay? Learn more about working at Kloeckner and check open positions.

Sara Montijo is a writer for Kloeckner Metals. 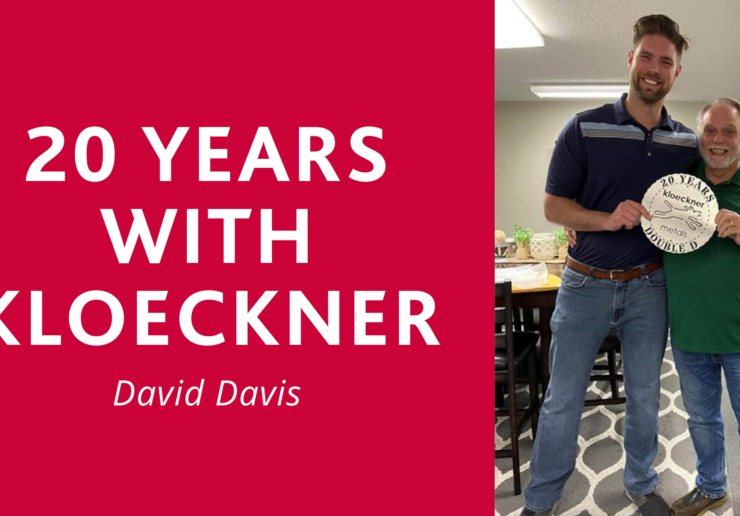