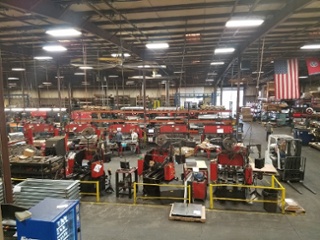 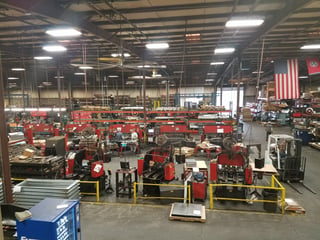 For 25 years Jonathan Gregory has been working at American Fabricators, Inc. (AFI). He started out in the plant as the second shift brake department lead man and has since worked his way up to Operations Manager. The philosophy of leading by example is a core part of the AFI workplace, and it is a big reason that many of the managers have “been there, done that.”

“If there is an equipment failure or problem, I can go out there and put my hands on it and solve the problem because I have that experience and that knowledge,” Jonathan says. “If I pull my sleeves up and pull my gloves on and put my gear on, and the guys see me do that, then it makes it all better for them.”

Many of the people at AFI have been there for 25 years or longer. A few have been there since day one. Every day starts with a tier one meeting where each lead man in each department gets their team together and talks about objectives of the day. At 7:30, there is a tier two production meeting where all the lead men and plant supervisors get together and spend about 30 minutes going through the backlog. They talk about any safety initiatives, quality issues, or concerns. After that, the guys are cut loose and everyone gets to work.

“We focus and work that day on what we know needs to be done today,” Jonathan says. “We really have to look at what is in our control that we have to accomplish today.”

Being bought by Kloeckner Metals has made an already busy AFI all the more hectic. The addition of the Kloeckner sales team has provided even more access to customers and work. Right now, there are around 150 direct employees in the plant. Even before Kloeckner became involved, AFI was a growing company with a good reputation in the industry. With the addition of the Kloeckner resources, that has been kicked into high gear. Every year, the customer base continues to grow.

“We know that it’s busy, we know that it’s hectic, but that’s a good sign because we are a healthy, growing company,” Jonathan says. “The hectic, busy day proves that we have a ton of work on the books, and we’re working toward growing this company.”

Keeping the attitude that being busy is good has been very important at AFI. Many people on the team are regularly working overtime and Saturdays. The dedication of the team has been demonstrated time and again. It is up to the supervisors to encourage them and adopt a good attitude.

“I tell our guys that the folks on the plant floor are going to take on our attitude,” Jonathan says. “So I encourage the supervisors and lead men to go out into the plant with a good attitude. Attitude is a lot of times contagious.”

As a result of the high workload, AFI has plans to add a third shift in June. This should help alleviate the amount of overtime being put in. It will also position AFI to be able to take on more work while still meeting the high standards set by customers. The third shift will work Friday, Saturday, and Sunday, 12 hours a day. This will mean the plant will run 7 days a week.

“Frankly, it’s one of those places where you can talk about it, but you really can’t understand exactly what we’re capable of doing until you get in here, walk the floor, see the equipment, see how diverse we are, and look at our huge customer base,” Jonathan says.

Lightweighting, a concept in the automotive industry, demands that all...

The 2021 International Roofing Expo takes place at the Mandalay...